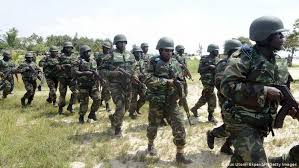 Oyogist has learned that Nigerian military officials said it has killed at least 78 gunmen belonging to various criminal gangs during an aerial bombardment of their hideouts in the north-west part of the country.

Many fighters were killed as they tried to escape the airstrikes on motorbikes, Air Commodore Edward Gabkwet said.

The Nigerian authorities over the years have been criticised for their failure to end the violence which has also claimed thousands of lives in recent years.