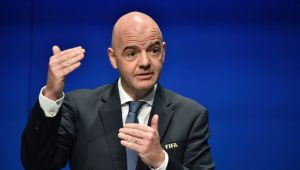 Oyogist has learned that football governing body, FIFA Is currently considering bringing in series of controversial changes to the current football system.

According to Mundo Deportivo, FIFA are looking for ways to improve the game and will be trying out a series of different rules in the ‘Future of Football Cup’ youth tournament that will include Under 19 sides from PSV, AZ Alkmaar, RB Leipzig and Club Brugge.

Secondly, the referee will blow his whistle after 60 minutes , indicating a stoppage time.

A match would also be halted whenever the ball gets out of play in attempt to crack down on persistent time-wasting and there will be kick-ins, instead of throw-ins.

Also if these plans go ahead, unlimited substitutions will be permitted.