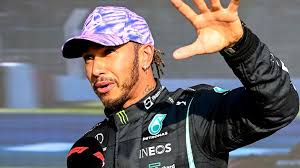 Oyogist has learned that award winning formula one Champion, Lewis Hamilton has won the British grand prix for the eight consecutive time after overshadowing Max Verstappen, who is currently leading the drivers’ championship this season.

Hamilton made a number of attempts to overtake Verstappen on that first lap and when the drivers arrived at Silverstone’s Copse Corner, Verstappen had a major collision and crashed into the barriers, though the Dutchman was able to walk away from his wrecked car.

Hamilton chased down Leclerc and on lap 50 swept past the Ferrari — on Copse Corner of all places — to take the lead and then secure his 99th race victory.