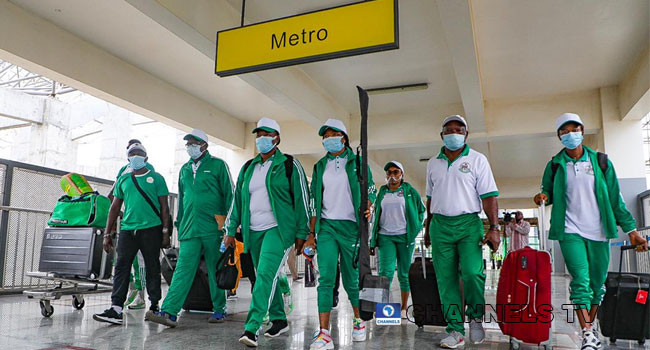 Oyogist.com has learned that the first batch contingent of Team Nigeria have departed for the Tokyo 2020 Olympics.

The team members departed on Tuesday, July 6, through the Nnamdi Azikiwe International Airport in Abuja.

According to the Director, Federation of Elites Athletes Department, Dr Simon Ebhojiaye, members of the Canoeing team, Ayomide Bello and her coach Ebenezer Ukwunna, Esther Toko and her coach, Regina Enofe of Rowing event alongside Secretary-General Olubunmi Oluode will depart through the Nnamdi Azikiwe International Airport by Ethiopian Airline.

Earlier on Monday, an advance team of the Ministry of Youth and Sports Development departed via the Muritala Mohammed International Airport in Lagos.

The Minister of Youths and Sports Development, Sunday Dare at the send forth ceremony held in Abuja on Tuesday morning said the departure of the team for the Games is evidence that “working in unison, we can collectively, achieve whatever we set our minds to achieve as humans.”

He said all the athletes and officials that would feature at the Games have been severally educated on COVID-19 compliance and anti-doping instructions and urged them to adhere to the rules in order to compete safely and avoid the discomfort of COVID-19 isolation.

“In continuation of his grandiose support to the sports sector, President Muhammdu Buhari has committed enormous resources in the preparation and participation of Team Nigeria for the Tokyo 2020 Olympic and Paralympic Games.

As part of this effort, Mr. President would formally unveil the official Team Nigeria uniform for the Games during the presentation of the contingent to His Excellency, by the Honourable Minister,” Dare added.