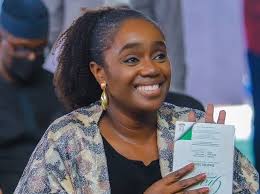 The Abuja Division of the Federal High Court has stated that ex-finance minister Kemi Adeosun does not need the National Youth Service Corps (NYSC) exemption certificate to hold a political office, Oyogist.com reports.

This comes, following the NYSC certificate scandal Ms Adeosun was involved in, after which she resigned and fled to the UK in 2018.

Justice Taiwo Taiwo, in his ruling on the originating summons, held that the NYSC certificate, based on the constitution was not a mandatory requirement to hold a political office in the country

“I am of the view that denying the plaintiff of the reliefs sought is not going to be doing justice to the matter,” he said.

The judge, therefore, granted all the four reliefs sought for determination by the former minister.

By the ruling, the NYSC certificate becomes just a sheet of paper, not important for her to hold the job and not important to have led to her resignation.

It is unclear if President Muhammadu Buhari’s regime or the police will sue or has filed a lawsuit against Ms Adeosun for using a forged NYSC exemption certificate.

While Ms Adeosun was the plaintiff in the suit, the attorney general of the federation was the sole defendant.