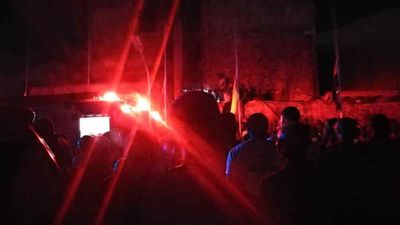 According to reports reaching Oyogist.com, Fire erupted in a building inside the Synagogue Church Of All Nations headquarters in Lagos Monday night during the funeral ceremony of TB Joshua, the founder of the church.

The fire, which was noticed at about 11 p.m., affected a building that housed a store on the premises, some metres away from the church’s main auditorium.

The cause of the fire is yet to be ascertained but some church officials said it resulted from an electrical spark.

As of midnight, the fire has been largely contained by a crowd of worshippers who were using containers to scoop water from near the church and dashing to douse the flames.

Officials of the Lagos State Fire Service arrived at about 12:15 a.m.

Joshua’s widow, Evelyn Joshua, led about 6,000 mourners in a candlelight procession to mark the beginning of a week-long funeral rite of the controversial Nigerian preacher, T.B Joshua who died last month a few days before his 58th birthday.

Zamfara State Governor reveals why he defected to APC