JUST IN; Yorubas in Diaspora protest over attack on Sunday Igboho’s residence 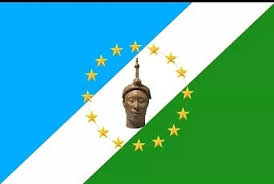 Oyogist has learned that Yorubas outside Nigeria staged a protest Earlier today at the Nigerian Embassy in United Kingdom over the attack launched by the Department of State Services (DSS) on the residence of Yoruba Nation agitator, Sunday Igboho.

The aggrieved protesters chanted different solidarity songs, and also displayed placards with inscriptions; “Location 419.. #YorubaNationNow, “Yoruba Nation. No going back”, “Sunday Igboho is a man of the people”, “Oduduwa Nation must stand.”

A protester, Grace Dada said, “What did Igboho do to the federal government? Gumi is there patronising bandits, why didn’t they arrest him?“They killed two persons, we want them to release those arrested. We are not criminal, Yorubas are peaceful people. Since Igboho has been doing the rally, it has been peaceful.”
DiasporaSunday igbohoYourba Nation
Share
0
FacebookTwitterPinterestLinkedinRedditWhatsappTelegramViberEmail