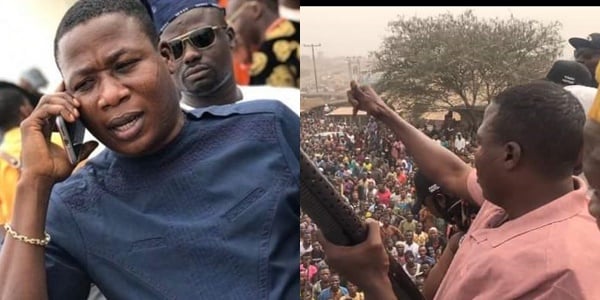 According to report reaching oyogist.com, the good people of Igangan community in Oyo State, have expressed their utmost gratitude to popular Yoruba activist, Chief Sunday Adeyemo also known as Sunday Igboho, for his timely intervention in liberating the community from the strong grip of the killer Fulani herdsmen.

This was made known in a statement issued by the Chairman Igangan Community Council, Mr Segun Okedeji and President, Igangan Development Advocates, Mr Wale Oladokun, who also used the opportunity in lauding the Oyo state Governor, Seyi Makinde, Inspector General of Police, Abubakar Adamu and the Commissioner of Police in Oyo State, Mrs. Ngozi Onadeko for their intervention.

The statement read, “We, the entire people of Igangan community in the Ibarapa North-West Local Council Development Authority, in conjunction with the chiefs and the entire youths of Igangan under the umbrella of the Igangan Development Advocates wish to express our unalloyed appreciation to Chief Sunday Adeyemo aka Igboho for his historic and heroic action towards restoring peace in Igangan and Ibarapa land.

“We equally want to express our hearty gratitude to the Inspector General of Police, Mohammed Abubakar Adamu, who was ably represented by the Oyo State Commissioner of Police, Mrs Ngozi Onadeko, at the recently concluded security meeting in Igangan, which was aimed at engendering peace in the much troubled Ibarapa zone.”