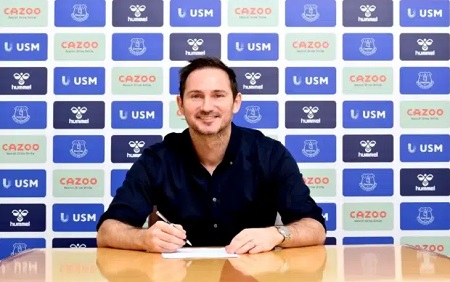 Oyogist.com has learned that Frank Lampard has been announced as the new manager of Everton The Premier League side made the announcement on Monday.

Recall that the Merseyside club had shortlisted Lampard as one of the coaches to replace Rafael Benitez who was sacked last week owing to a poor run of results.

In a statement on its website, Everton said the former Chelsea manager has agreed to a two-and-a-half-year deal that will see him stay at the club until 2025.

The club added that Lampard will be in the dugout for the FA Cup fourth-round tie against Brentford at Goodison Park on Saturday, February 5, 2022.

The statement reads: “Everton Football Club can confirm the appointment of Frank Lampard as the Club’s new manager.“The former England midfielder has agreed to a two-and-a-half-year contract – until June 2024 – and will take charge of the First Team for the FA Cup fourth-round tie against Brentford at Goodison Park on Saturday 5 February.

“The appointment of Lampard comes after a robust recruitment process with several candidates being interviewed by the Club’s majority shareholder and Board of Directors.

“Lampard started management with Derby County in 2018, leading the Rams to the final of that season’s Championship play-offs.

“He was appointed head coach at former club Chelsea the following year and, helping develop many of the club’s young talents, guided the Londoners to fourth place in the Premier League and the FA Cup final in his first season in charge.

Speaking on his appointment, Lampard appreciated the club for finding him worthy to be appointed as the new manager, stressing that he is eager to start work.

He said: “It is a huge honour for me to represent and manage a club the size and tradition of Everton Football Club. I’m very hungry to get started. After speaking to the owner, Chairman and the Board, I very much felt their passion and ambition. I hope they felt my ambition and how hard I want to work to bring it together.

“You can feel the passion Everton fans have for their club. That will be hugely important. As a team – the competitive level that the Premier League brings and the position we are in the table – we certainly need that. It’s a two-way thing. I think Everton is a unique club in that you can really understand what the fans want to see. The first thing they want is fight and desire and that must always be our baseline.

“My first message to the players will be that we have to do this together. We’ll try to do our job and I know the fans will be there backing us.”