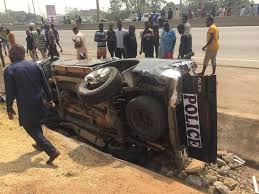 According to reports reaching Oyogist.com, The FCT Police Command, lost three police officers in an accident along Kubwa-Zuba Expressway on Sunday.

It was gathered that the accident which occured opposite the Gwarinpa Estate involved men of the Special Tactical Squad (STS) of the Nigerian Pikuce Force.

The accident reportedly occurred when one of the tyres of the police van conveying members of the squad to Kaduna on an operation bursted.

It was learned from an eye witness account that the Hilux van veered off the road and entered a ditch where the three officers died instantly, leaving others with varying degrees of injures.

The officers were reportedly escorts heading to Kaduna for a special assignment.

The officials of the Federal Road Safety Commission (FRSC) and FCT Emergency Management Agency (FEMA) arrived the scene afterwards to rescue the injured and evacuate the bodies of the deceased to an undisclosed hospital.

When contacted, the FCT Police Public Relations Officer (PPRO), DSP Josephine Adeh, described the incident as an unfortunate and sad one, adding that the exact number of casualty was yet to be ascertained.