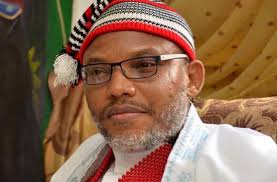 Oyogist.com has learned that Nnamdi Kanu leader of the Indigenous People of Biafra has sued AGF, DSS Over Alleged Denial of Fundamental Rights in DSS Custody

Kanu is seeking an order from the federal high court in Abuja to compel the DSS to allow him access food, medical care and clothes of his choice.

The suit marked FHC/ABJ/CS1585/2021 is instituted on his behalf by Barrister Maxwell Chibuike Okpara, his attorney.

In the suit dated December 13, 2021, Kanu also applied for another order against DSS to allow him make arrangements for his food by himself at his own expense.

No date has been fixed for hearing of the suit.