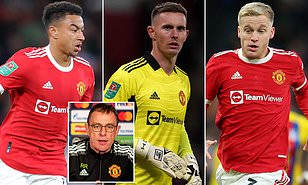 Oyogist.com has learned that Manchester United’s interim manager, Ralf Rangnick, has reminded his players that tonight is a ‘opportunity to perform’ in the Champions League.

The reds would clash with young boys today.

United have already secured first place in their Champions League group, therefore the German boss is expected to make a few chances for tonight’s match.

Ralf while speaking with reporters said he wants to see the players under pressure in a Champions League game in front of 75,000 in a sold-out stadium.

Donny van de Beek will also be in the starting XI.

‘This is a perfect opportunity to get to know the players, like I did last Sunday against Palace. We have only had a week of training so far.

‘With every training session, every opportunity to see them in competitive games, I will get to know them better, he said further.