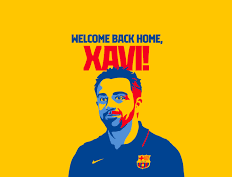 Oyogist has learned that Spanish football legend, Xavi Hernandez has been announced as the new head coach of FC Barcelona following the dismissal of Ronald Koeman.

Barcelona announced in the early hours of Saturday that Xavi has agreed to a contract through 2024 after the former Spain midfielder was released from his contract as the coach of Qatari club Al-Sadd.

“FC Barcelona have reached an agreement with Xavi Hernández for him to become first team coach for the rest of the current season and two more seasons,” Barcelona said in a statement headlined “Welcome back home, Xavi!”.

“Xavi Hernández, a youth team product at Barça, has left his current club, Al-Sadd of Qatar, after talks held over the last few days with the owners of the club.” The statement read Futher

Xavi will be introduce as the new coach on Monday.

“It wasn’t goodbye, it was ‘see you soon’. The Camp Nou has always been my home,” Xavi said in a video addressed to his former club.

“The Al Sadd administration has agreed on Xavi’s move to Barcelona after the payment of the release clause stipulated in the contract. We have agreed on cooperation with Barcelona in the future.