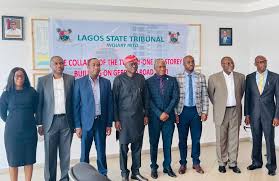 According to reports reaching Oyogist.com, Governor Babajide Sanwo-Olu on Thursday inaugurated a six-man panel of inquiry to investigate the cause of the collapse of the 21-storey building in Ikoyi, Lagos.

Mr Sanwo-Olu inaugurated the panel at the headquarters of the Lagos State Waterways Authority (LASWA) at Falomo where members of the panel would be sitting.

The governor also signed an executive bill to give legal backing to the panel during their period of sitting.

The panel will be chaired by Toyin Ayinde, the president of the National Institute of Town Planners.

members of the panel are Akintilo Idris; Yinka Ogundairo, an architect; Godfrey Godfrey, a builder; Bunmi Ibraheem; and Ekundayo Onajobi, the secretary of the panel.

Sanwo-Olu urged the panel to be professional and factual in their findings, in order to give closure to the families of those who lost their lives in the incident.

As of Thursday afternoon, the death toll from the collapsed building have risen to 36.

The governor said members of the panel should not hesitate to seek an extension, if the 30 days term of reference given is not enough.

The Deputy Governor, Obafemi Hamzat, who was also present at the inauguration, said the panel of inquiry has the mandate to unravel the circumstances surrounding the collapsed building with a view to bringing all culprits to justice to avert a recurrence of such incident.

Mr Ayinde, the panel chair, assured the state executives of a thorough investigation of the incident without fear or favour.

The panel would commence sitting on Friday.