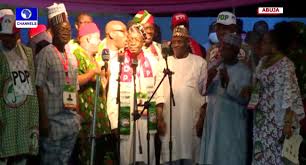 Oyogist.com has learned that former President of the Senate, Senator Iyorchia Ayu, has emerged as the new National Chairman of the Peoples Democratic Party (PDP).

Senator Ayu, a consensus candidate for the position, took over the leadership of the main opposition party alongside 20 others elected into various positions within the PDP National Working Committee.

The new set of leaders were elected at the party’s national convention which began on Saturday and lasted till the early morning of Sunday.

Hundreds of party delegates participated in the election of the new national officers at the Eagle Square in Abuja.

Wizkid announces date for the release of his next album, ‘More Love, Less Ego’ for Jan 2022