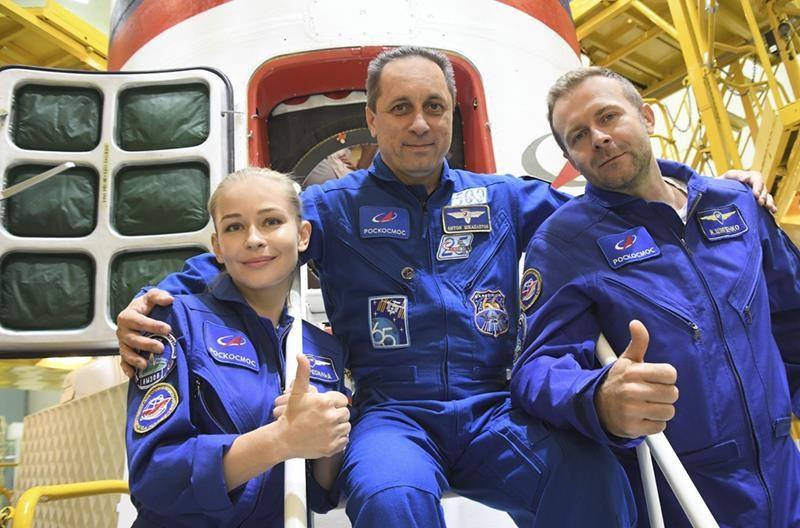 Oyogist.com has learned that Russian actress and director arrived at the International Space Station on Tuesday to begin a 12-day mission to make the first movie in orbit.

The Russian crew is set to beat a Hollywood project that was announced last year by “Mission Impossible” star Tom Cruise together with NASA and Elon Musk’s SpaceX.

Actress Yulia Peresild, 37, and film director Klim Shipenko, 38, took off from the Russia-leased Baikonur Cosmodrome in ex-Soviet Kazakhstan as scheduled.

They docked at the ISS, behind schedule at 1222 GMT, after veteran cosmonaut and captain of their spacecraft, Anton Shkaplerov, switched to manual control.

As the hatches opened, the Russian trio floated into the orbital station where they were greeted by two Russian, a French, a Japanese and three NASA astronauts.

The crew travelled in a Soyuz MS-19 spaceship to film scenes for “The Challenge”.

The movie’s plot, which has been mostly kept under wraps along with its budget, centres around a female surgeon who is dispatched to the ISS to save a cosmonaut.

Shkaplerov, 49, and the two Russian cosmonauts already aboard the ISS are said to have cameo roles in the film.

Konstantin Ernst, the head of the Kremlin-friendly Channel One TV network and a co-producer of the film, said he spoke with the crew as soon as they docked.

“They are in good spirits and feel well,” Ernst told AFP.