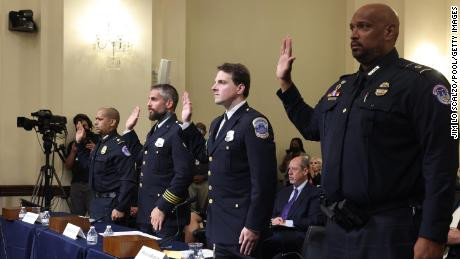 Oyogist has learned that Four police officers who guarded the US Capitol Building from the pro-Trump mob that invaded it on Jan. 6 have blamed former US president, Trump, and Republicans for allegedly inspiring the attack and then downplaying the attack after it was carried out.

The officers while speaking at an inquiry hearing organized by the US House of Representatives into the attacks, asked members of the House select committee investigating the events of that day to get to the bottom of the incident.

Before the hearing, Republicans had already pulled all of their appointees to the committee after House Speaker Nancy Pelosi, D-Calif., blocked two of them for being allies with Trump, leaving only Reps. Adam Kinzinger, R-Ill., and Liz Cheney, R-Wyo. who were selected by Pelosi as the sole republicans.

“The mob of terrorists were coordinating their efforts… shouting ‘heave, ho,’ as they synchronized pushing their weight forward crushing me further against the metal doorframe,” a police officer had said.

“A man in front of me grabbed my baton… he bashed me in the head and face with it, rupturing my lip and adding additional injury to my skull. He said Further.

Meanwhile, The committee members, led by Chairman Bennie Thompson, D-Miss., asked the police for details about who the rioters were, and for what they would like to see the committee accomplish.