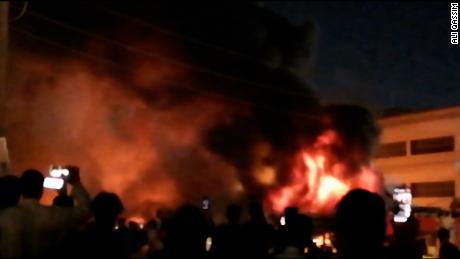 Oyogist has learned that not less than 41 people were killed in a hospital fire in the southeastern Iraqi city of Nasiriya, Iraq.

Also not less than least five people were critically injured.

“The civil defense teams managed to control and put out the major fire that broke out at al-Hussein hospital in the city with the help of health workers and neighborhood volunteers, an eyewitness present at the hospital said.

Iraqi Prime Minister Mustafa Al-Kadhimi said he would hold an emergency meeting with ministers “to find out the causes and repercussions” of the deadly fire, on Tuesday, July 13th 2021.