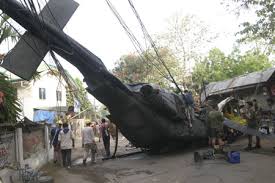 Oyogist has learned that not less than 29 People were killed following a Philippines Air Force plane crash Earlier today.

The plane was reportedly conveying troops when it blew up in flames after crashing.

So far at least 50 people on board were brought to a hospital and troops were trying to search for the rest, military officials said.

“The plane missed the runway and it was trying to regain power but failed and crashed.”

Singer Tekno reveals why he left Nigeria for the United States