Erica and Kiddwaya get in trouble with Biggie while Nengi and prince get N250 000 each and an all-expense-paid VVIP trip to the One Africa Music Fest in Dubai from Pepsi.

Things were quick to take a different turn when Biggie asked Housemates to view some footage from earlier in the week. It showed Kiddwaya flipping his fingers at the camera, clearly showing blatant disrespect for Biggie’s authority. This caused Biggie to refer to article 18 in the rule book which is dedicated to prohibited behaviour, particularly on page 14. This section of the article tackles rudeness to Big Brother which is listed as a punishable offence.

To Erica and Kiddway, Biggie said “your actions have no other words to describe them but blatant disrespect to Big Brother and the viewers. Your flipping of fingers to the camera did not go unnoticed. The first incident occurred on the same day you were both issued a strike for disrespecting the Head of House rule.” Biggie added that he decided to be lenient on them because they were issued a strike for that offence already.

Erica was then issued a strong and final warning while Kiddwaya was issued a strike, meaning that one more strike will result in immediate disqualification from the Big Brother house. 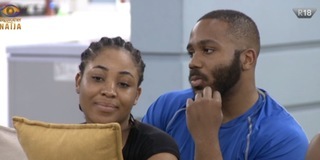 It remains to be seen if the two will toe the line as we look forward to more drama.