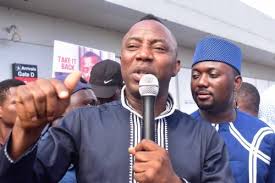 Oyogist has learned that Popular Revolution Now crooner, Omoyele Sowore who was arrested in Abuja has been released.

Sowore was arrested by security operatives for attending the court cases of Nnamdi Kanu, leader of the Indigenous People of Biafra (IPOB) and #BuhariMustGo protesters at the Federal High Court, Abuja.

A few hours after their arrest, the ‘Buhari-Must-Go’ activist announced he had been released alongside others.

He said: “They have just released us.

They dragged, harassed and beat us.

“They took us to the Federal Secretariat Police Station. I told them that they have no right to arrest me.

“I have a right to observe the trial of Nnamdi Kanu. took our cards and deleted all recordings.

After his release, Sowore was seen around the court premises with other youths.

Nigeria’s pro-Biafra leader, Nnamdi Kanu who was due to appear in an Abuja court today, to face treason and other charges suffered a setback after the Department of State Services (DSS) failed to produce Kanu in court.

Justice Binta Nyako adjourned the trial on Monday to October 21, at the resumption of proceedings at the court in the Federal Capital Territory (FCT). The Rivers State government has revealed that a discharge protocol has been activated for the index case in the State. Commissioner for Health in the state, Professor Princewill Chike made the revelat
Read More The former Emir of Kano, Emir Sanusi Lamido Sanusi, has taken the State government of Kano t court for breaching his freedom of free movement after his dethronement as the Emir.
Read More The former Senator who represented Kogi West senatorial district, Senator Dino Melaye, has expressed thanks to God in his victory at the court. He said that the case which was filed against him by the
Read More