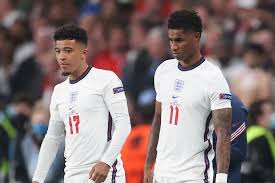 Oyogist has learned that the Football Association, has openly condemned the “disgusting” racial abuse aimed at Marcus Rashford, Jadon Sancho and Bukayo Saka after the Euro 2020 final.

The England players received heartbreaking messages on social media after suffering a massive defeat by Italy on Sunday night.

The FA also released a statement saying they are “appalled” by the abuse suffered by Rashford, 23, Sancho, 21, and Saka, 19.

Arsenal also took to Twitter to support their teenage star Saka, saying: “Football can be so cruel. But for your personality. For your character. For your bravery… We’ll always be proud of you. “I would have sold Messi”- Barcelona Interim President

Oyogist.com had learnt that the interim Barcelona president, Carles Tusquets, has said the club should have sold captain Lionel Messi in the summer. Messi tried to force his way out of Barca this summ
Read More Arsenal will begin their premier league campaign by playing two London Derbies. The first is away to newly promoted club Fulham in their opening fixture of the 2020/2021 season. After that they play a
Read More Arsenal are now busy in the transfer market negotiating to secure signatures of their target players. Mikel Arteta is on the front line to have classy players signed and partner with them next season.
Read More