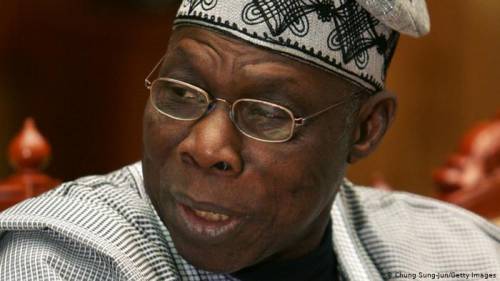 Oyogist has learned that Former Nigerian President, Olusegun Obasanjo has called on all Secession group in the country to dissolve the idea and work for the unity of Nigeria.

According to Obasanjo, it is better for Nigeria to remain as one indivisible nation, rather than for each tribe to go its separate way.

The Former President made this known during the launch of Nigerian Institution of Surveyor, in Ogun State.

“If there is any Nigerian who does not feel apprehensive on the situation of the country, the person is a human being without being human.

“I believe that if we talk among ourselves the way we should and if we change the narrative, I believe this is a great country. That we are not making Nigeria what God wants it to be is not the fault of God, but the fault of ourselves, particularly our leaders.

“One thing that gives us strength is our diversity. If all that we have is Republic of Oduduwa for those who said so, their position is understandable. If that is all we have, members of that country will be diminished compared to be a citizen of Nigeria. Citizens of Oduduwa Republic or any other republic from Nigeria will be diminished compared to citizens of Nigeria.

“And as a friend of mine in the military used to say then, what will become of the over 300 minorities – the Jukuns, the Gbasamas? Where will they belong? The only reason they can raise up their heads is because they belong to Nigeria. Are we thinking of them or are we just being selfish? It doesn’t matter what we do, we will still be neighbours.

“I believe it will cost us less to work for our unity, there are many things wrong, but those things are correctable if we make efforts to correct them and hold us together than what it will cost us to break up and be perpetually at war and all our money will be spent in building an army. I know what an army contains, I know what it means to keep an army, an army that may not be productive, let us think about it,” Obasanjo stated. According to report reaching oyogist.com, Senate President, Ahmed Lawan, has said that lack of compliance with resolutions of the Legislature was hindering the achievement of good governance in the co
Read More Lai Mohammed Speaks on the Ongoing #EndSARS protest, says its one of the most successful Protest so far

The Minister of Information and Culture, Lai Mohammed, has commended the #EndSARS protest in Nigeria saying it's one of the most successful demonstrations Nigeria has ever witnessed, oyogist.com learn
Read More OYOGist.com has learned that the Kano State Governor, Abdullahi Umar Ganduje, has boasted of the record of the anti-corruption efforts of the state government, and said that the state has one of the m
Read More