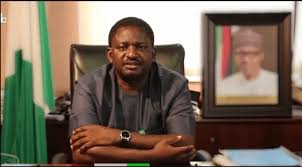 Pres Buhari’s spokesperson on media and publicity, femi Adesina has berated Nigerians as people who rejoice at iniquity, evil “and they think somebody is being done in.”

Adesina disclosed this in his weekly article captioned “LET’S GARLAND BEN AYADE,” as he felicated with the Cross River governor for his defection to the All Progressives Congress.

According to the presidential aide, many Nigerians are not like Ayade who saw character, honour, commitment, selflessness, transparency in President Muhammadu Buhari.

“I felt like embracing Governor of Cross River State, Ben Ayade, a couple of weeks back when he left the People’s Democratic Party (PDP) for the All Progressives Congress (APC).Was that because I work with a President elected on the platform of the APC? Not necessarily so. Yes, I’ve never really liked the PDP because I felt there was too much of buccaneering in the party, but I’d always been honest enough to give some governors in the fold of the party who were doing well their dues.

“always mentioned Rotimi Amaechi of Rivers State (he was still in PDP then), Danjuma Goje of Gombe State, and some others. They stood out for the good works in their states.When the APC came, and made Muhammadu Buhari its presidential candidate in 2014, I gladly threw in my lot with the party, not as a registered member though. Whither Buhari goest, I go.

“Ayade’s crossing over to APC was very good for the party. The more governors, the merrier, and the brighter your chances of retaining power at the centre.We will come back to that, but first, my reason for being happy with Ayade, to the point of considering a warm embrace.Hear the Governor when he gave reasons for crossing the carpet:

“Having seen and known the President and his commitment to this country, his nationalistic disposition and all the efforts he has made to bring Nigeria to where we are today, it is obvious that at this point, we needed to join hands with him to build a Nigeria that we can be proud of.

“We need all governors to recognize that it is not the party that matters, it is character, honour, commitment to the vision of this great nation.
”This resonates deeply with me. For if there is one thing lacking in our country, it is love for the nation. Some Nigerians actually rejoice when negative things happen to their own country. They rejoice at iniquity, at evil, and they think somebody is being done in, not knowing that the land is the ultimate loser. They swallow poison, and think it would kill their neighbors. Pity!Also lacking in our blessed but blighted country are virtues like character, honour, commitment, selflessness, transparency, which President Buhari has a-plenty, and which Gov Ayade has seen, and which brought him into the APC.

“That is the reason for the intended embrace.Cross River State has always been PDP, and may still be largely so, but Ayade did not mind.He was actuated by enough love for country to know that his former party was not the way to go any longer, not minding the personal consequences, Adesina stated further. PDP has charged President buhari to replicate the transparency in Edo election, also in Ondo Election.

The Peoples Democratic Party has charged President Muhammadu Buhari to replicate the transparent outcome of Edo State governorship election during the same event in Ondo State on October 10, 2020. He
Read More The universal community expanded weight on the military junta that has held onto power in Mali coup, as the Organization Internationale de la Francophonie (OIF) suspended the country from its enrollme
Read More