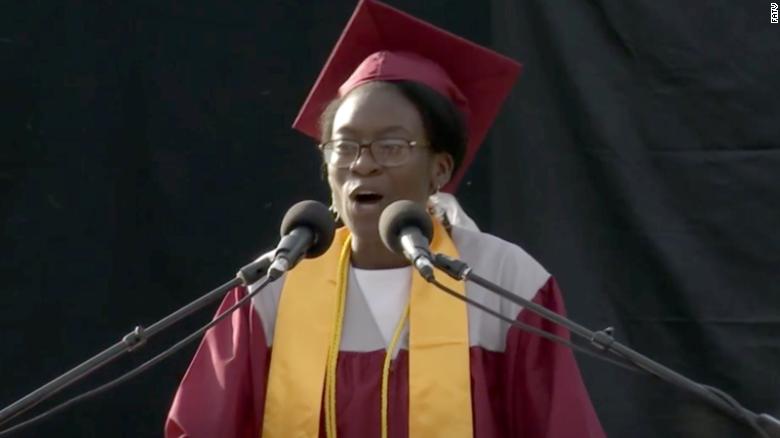 Oyogist.com has learned that a Massachusetts high school student, Verda Tetteh made an unexpected announcement during her graduation ceremony last week when she asked that a $40,000 scholarship awarded to her be given to a student attending community college instead.

“I’m very grateful for this but I also know that I’m not the one that needs this the most.And knowing my mum went to community college and how that was helpful.

I would be so very grateful if administration will consider giving the scholarship to someone going to a Community College.I know it is such a great honor but I’m not one in most need of it”, she said.

The crowd, made up of her fellow classmates, their families, teachers and school administrators, applauded and cheered Tetteh after she made her announcement.

When she started speaking on the microphone, I was overwhelmed. I think a lot of people in the stadium were, honestly,” Principal Jeremy Roche said. “I was so moved by her generosity.”

Further information has it that Tetteh, 17, told plans to study biochemistry at Harvard College in the fall.

Tetteh who immigrated from Ghana to the United States as a child said she felt confident that she would be able to pay for the cost of tuition through other scholarships from the high school and Harvard’s policy to cover 100% of demonstrated financial need for students. It was another tale of damage again as another cult clash yesterday led to the shooting and beheading of a 34-year-old man in Calabar, Cross River State capital. In the past two weeks, over seven pers
Read More The governor made this known at the reconciliation committee meeting of the Lagos PDP members which held the Lugard office of Chief Bode George in Lagos. The governor said, “As you can see it was miss
Read More A man has narrated how he was rewarded after passing an integrity test that was set for him by his bosses when he reported that he was paid an amount over what he is originally supposed to receive. Th
Read More