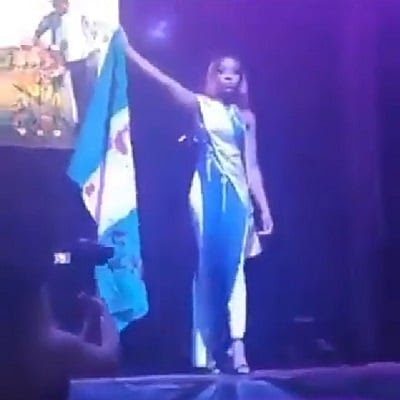 Oyogist has gathered that Udeh Chiamaka Victoria, the model who showcased a blood-stained Nigerian flag during the Miss Africa Russian runway, has cried out as she lamented over the incessant death threats she is currently receiving on a daily basis ever since the video went viral.

The Russia-based fourth-year medical student had provoked controversy on Tuesday after the viral video showed her holding up the red-stained flag while appearing on stage.

In a video chat with BBC radio, Chiamaka said;

“What I did was actually from my heart. I did it myself; no one told me to. It was a competition, a platform that was given to me. I used that platform to create an awareness of what is happening in Nigeria.

“I did it duo to what happened on October 20 [2020]. I also did it because of the recent happenings now in Nigeria. It was basically to tell the world that we’ve not forgotten our fallen heroes, the Lekki protesters who died.

“I did it to also portray recent happenings because there are still killings, insecurity, rape, and all of those things. The flag signifies everything. That category was the ‘Tradition Cultural or National Costume’.

“I felt that I should dress as a nationalist to portray what is happening. I never thought it was going to go viral at all. I don’t know who shared it with bloggers. Right now that it has gone viral, I have received a lot of threats.

“I have received a lot of insults but it’s okay. People who got the message got it. For those who didn’t, it’s not on me. It was never my intention to tarnish the image of Nigeria. It was me creating an awareness that we need help,” she said The Kano State Government has said that it will continue to pursue legal action against the alleged blasphemous singer, Yahaya Sharif, whose death sentence by an Upper Sharia Court was quashed due to
Read More At least one person has been killed and a number of other others injured during a feud that ensued between youths of two different settlements within the Water Board area of Jalingo, the Taraba capita
Read More