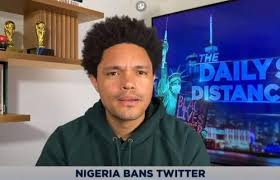 In a 6 minutes short clip uploaded on the daily show Official twitter page, Noah spoke regarding the numerous factors which led to a decline in the value of Bitcoin over the past few months.

“Shout out to African presidents, because they will always remind the world what a real dictator looks like,” Noah said.

“Because remember, when when Twitter started flagging Trump’s tweets, all he did was throw a tantrum. You know, he’s got to be jealous as hell right now.

They knew what they’re doing. Buhari, thank you.” he concluded. Today is America's favorite former First Lady, and the first black woman to become America's First Lady thanks to her husband Barak Obama winning the presidency in 2008.
Read More Veteran Actress, Hilda Dokubo has taken to her social media page to bitterly react after Senator Abbo was the Patron of the Actors Guild of Nigeria, months after he was caught on camera allegedly assa
Read More Pictures of your favorite celebs doing the #dollypartonchallenge

The latest Challenge trending on the internet today is called the #dollypartonchallenge. And in case you're wondering what that is, we got you covered.
Read More