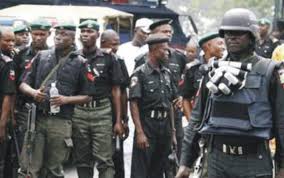 Oyogist.com has learned that a Nigerian man with handle @misterfib has narrated his ordeal with police officers who assulted him and carried him away in order to extort money.

According to sources, the officers flagged him down and searched his car, but found nothing only to ask him how he got the car.

The man went ahead to show them his Website and fishfarming activities, they inflicted severe pains on him and demanded the sum of 500,000 naira in order to secure his release.

He questioned the offer but the officers continued pouncing on him severely.

Upon arrival his dad called someone at the areas and in 5mins they decided to release him, hi e was weak and bleed profusely, the source further stated. One of the black police officers at the scene of the killing of George Floyd by a white officer in Minneapolis in May has a Nigerian father, OYOGist.com has learnt. Alex Kueng joined the police largel
Read More OYOGist.com has learned that a young Nigerian lady identified as Martina Oge Ifemeje Mgbechi, has said that you don’t have anything to do with marriage if you don’t like or want sex. Taking to her Fac
Read More

A bondage addict in Warwick England has been jailed for tying a woman to a chair and raping her, OYOGist.com reports. According to police reports, Mark Conway, 54, broke into the woman's home while sh
Read More