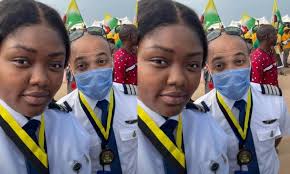 Oyogist.com has learned that young female Nigerian Identified as Nwando Okplaeke, reportedly became the first female pilot to land an aircraft at the new Anambra International Airpot on Friday, April 30.

@SoniaUzama said that their dad would have sent such news to different WhatsApp groups among other places.

“My dad would have been super happy today. The BC he would have sent wont be here. He most likely would have sent it to newspaper houses and all his WhatsApp groups (yes he is that dramatic). I really wish he was here to see my sister’s name and face everywhere.” Ex President Obasanjo has exhorted African youth on the best way to assume control over administration positions from the more old age. The previous president said initiative positions would not go to
Read More The police in Lagos have stopped activists and other concerned individuals from protesting the killing of Tina Ezekwe in the city. The teenager was hit by a bullet from the gun of a policeman trying t
Read More Borno State Deputy Governor, Umar Kadafur, has lamented that some citizens in the state doubt the existence of coronavirus, in the same manner, Boko Haram was initially underrated. Kadafur, who is the
Read More