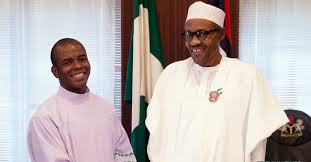 Oyogist.com has learned that the Spiritual Director of Adoration Ministry Enugu Nigeria(AMEN), Fr. Ejike Mbaka has been suspended by the Catholic Diocese of Enugu from church activities for one month following his involvement with politics.

Recall the cleric was declared missing yesterday which led to a massive protest at his home town in Enugu state but he later resurfaced later in the day urging for calm.

The diocesan Bishop Callistus Valentine Onaga has announced that mbaka proceeds with his suspension with immediate effect from May 3. The death of the ruling All People's Congress (APC) chieftain is a repeated affirmation of the fact that the deadly coronavirus disease is not a respecter of name, position or societal status.
Read More Political realignment begins in Enugu Ahead of 2023 Elections

The 2023 political realignment in Enugu State is likely to have begun, as former governor of the state, Chimaroke Nnamani, yesterday, led members of his Ebeano political group to confer leadership on
Read More According to report reaching oyogist.com, Ebonyi state Governor, David Umahi has insisted that he made PDP what the party is today. He made this known after Governor Nyesom Wike claimed PDP made the E
Read More