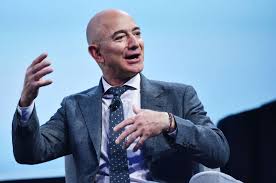 Oyogist.com has learned that Amazon CEO, Jeff Bezos has reportedly sold nearly 2 billion dollars worth of his shares to the online retailer earlier this week as reports by the US Securities and Exchange Commission showed.

Bezos had earlier in February and November 2020, sold shares worth more than 7 billion dollars.

He is currently the largest individual shareholder in the company. OYOGist.com has learned that there is possible light at the end of the tunnel as the world might come back to it's normal activities after scientist from Japan Fuji film largest pharmaceuticals compan
Read More As protests for the murder of George Floyd intensifies, an unarmed black American man by a white police officer who has since been arrested and charged with 3rd-degree murder, George Floyd protesters
Read More Farmer unions in India reject the newest moves by the govt to amend controversial new laws that have sparked protests. Farmers are protesting for quite fortnight against new laws which will deregulate
Read More