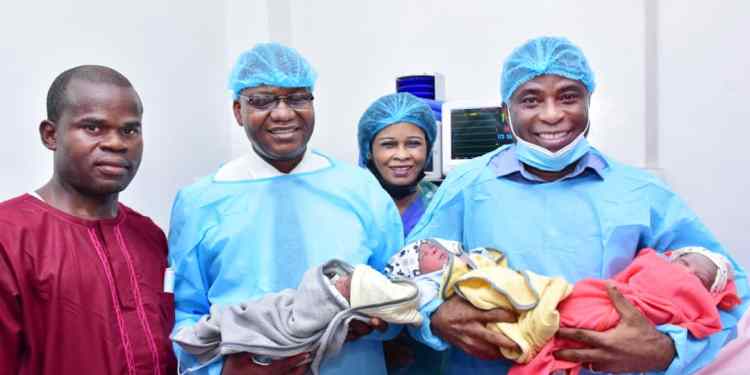 According to report reaching oyogist.com, the management of the University College Hospital, Ibadan, on Wednesday stated that it took delivery of set of triplets for the first time through In Vitro Fertilization in the hospital.

The UCH authorities said the procedure for the delivery commenced at about 1pm and lasted about 46minutes.
It was learnt that the mother and the babies, all females, are in good condition.

Their father, Dr. Kehinde Osiki of the Department of History and Strategic Studies, University of Lagos, was said to be on ground to witness the delivery of the babies.

The father of the newborn babies, who expressed joy on the arrival of the babies, said, “Technology has brought relief to problems often attributed to spirituality.”

He said instead of people carrying the burden of superstition, they should seek scientific solutions to problems, adding that married couples who could not have babies should not to lose hope as solutions abound.

The mother of the triplets works with the Forestry Research Institute of Nigeria, Ibadan.
The Chief Medical Director, University College Hospital, Ibadan, Prof. Jesse Otegbayo while expressing delight on the success story for UCH, expressed appreciation to the team that took the delivery.

He said, “We have the commitment to take UCH to an enviable level. In a way, the commitment has played out with the commencement of the IVF in 2020 and the delivery of the first set of babies through the process.”

A former Chief Medical Director of the Hospital, Prof. Abiodun Ilesanmi, lauded the management for its tenacity on the IVF project which he (Ilesanmi) initiated 13 years ago. OYOGist.com has learned that the Bauchi State Primary Healthcare Development Agency has said many residents of the state are wanting to be admitted to the isolation centre after they heard about the “
Read More The Madagascar’s Minister for education,Rijasoa Adriamanana, has been sacked over a plan to order $2.2million (£1.7) worth of sweets. Rijasoa said last week that she will order sweets for children in
Read More