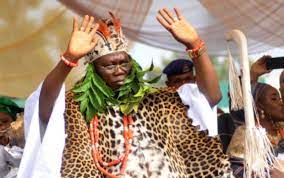 According to report reaching oyogist.com, the Aare Onakakanfo of Yorubaland, Iba Gani Adams, on Sunday, urged the Inspector-General of Police, Mr. Mohammed Adamu, to redeploy the Commissioner of Police in Oyo State, Mrs. Ngozi Onadeko, accusing her of playing politics with sensitive security issues.

Iba Adams, in a statement by his Special Assistant on Media, Kehinde Aderemi, also blamed the Oyo CP over her roles in the protracted detention of the three members of the Oodua People’s Congress, OPC, that handed over the notorious kidnap warlord, Abdullah Iskilu Wakili, to the police.

He vowed to seek justice against the unjust arrest, arraignment and charges of arson and murder for the trio.

The statement reads: “Last week, the Alaafin of Oyo, Oba Lamidi Adeyemi III, had expressed concern at the spate of insecurity in the state.

“Kabiesi lamented that over 70 percent of farmers in Oke-Ogun, Ibarapa and its environs could no longer go to their farms because of the fear of being kidnapped and killed by bandits and criminal Fulani herdsmen.

“From what Kabiesi had said, it is no doubt that there is impending danger lurking around the state. If farmers couldn’t go to their farms, then there would be famine and a shortage of food in the state.

“Oyo State is central to the progress and development of South-West; the state is blessed with 33 local governments and a landmass of about two states put together.

“So, such terrible situation will definitely affect the whole of the southwest. For instance, there was a report where kidnappers almost killed a teacher in Ibarapa. The teacher lost his hands to the criminal herdsmen.

“Therefore, I am appealing to IGP Adamu and the police service commission to redeploy the Oyo CP, who according to my finding, is too slow and biased, especially on sensitive security issues.”

Gani Adams also urged “Governor Seyi Makinde of Oyo State to cooperate with the IGP in ensuring that the state is safe for all and sundry because, from the reports at my disposal, kidnappers are now returning to Ibarapa as they know that with such a gentle cop as commissioner, they can easily get away with any crime committed in the state.

“What becomes of the police when people cannot trust them as an institution? It is unfortunate for the police to accuse the three members of our group of murder and arson after they had assisted them in apprehending Iskilu Wakili, a notorious kidnap warlord that had been terrorising the people of Ibarapa and its environs.

“With the present situation in the country and Oyo state, in particular, people would be discouraged most times when things like these happened, because there is no way organisations like ours that have the capacity to assist the police in ensuring effective security will continue without giving it a second thought.

“But we wouldn’t be discouraged in our effort. We will continue to play our roles in ensuring that our region is safe against criminal elements,” Gani Adams added

According to report reaching oyogist.com, the Oyo State House of Assembly has approved Oyo N100 billion prosperity bond, describing it as an alternative approach of the present administration to finan
Read More The Governor of Oyo State, His Excellency, Gover Seyi Makinde has just announced that his Coronavirus test has returned negative the second time, after going into isolation following a positive test,
Read More OYOGist.com has learned that the Oyo State Government under the leadership of Governor Seyi Makinde has set new guidelines for schools resumption and educational activities in the state. The decision
Read More