According to report reaching oyogist.com, Children of the police officers murdered during the #EndSARS protests in Ibadan, the Oyo State capital, have appealed to Governor Seyi Makinde to sponsor their education.

According to a report by The Guardian Newspaper, they said the death of their fathers had created a vacuum in their lives.

Besides, they appealed to well-to-do individuals to support them in ensuring that they have good education.

Makinde had promised to take care of the children of police officers killed during the protests.

A 12-year-old Kehinde Agunbiade, who spoke on behalf of the children of the slain police officers, said their mothers had withdrawn them from schools as they could not afford to pay school fees.

“Governor Seyi Makinde should consider our future as very important. We don’t need cash but we need education. He should give us scholarship.

“Since the gruesome murder of our fathers, it has been very hard for our mothers to feed us, let alone sending us to school. My father was running his masters degree programme when he met his untimely death. He told us that he was going to give us better education but he could not do it because of his death,” he said.

Also, wife of Rotimi Oladele, Feranmi Oladele, asked the state government to assist their children to have a proper education.

She said: “My husband was about to equip my shop before he died. I don’t have money and I don’t know how to care for my children. I need government to help support our children. Their education is very important. We need help.” 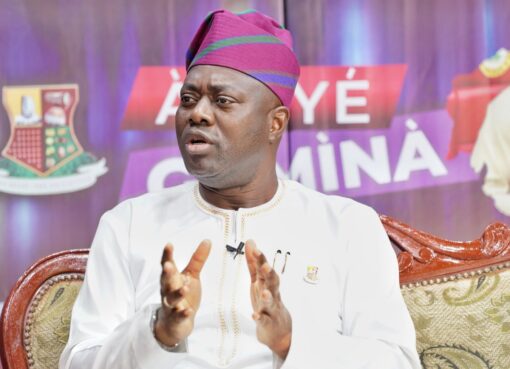 Governor Seyi Makinde of Oyo State has just announced that the first class traditional ruler of Ibadan, the Olubadan of Ibadan just conferred on him a traditional title.
Read More The Oyo Town market, Oja Akesan has was engulfed by fire in the early hours of Sunday, 5 January 2020 and the Governor of Oyo State, Governor Seyi Makinde has reacted to the news of the accident.
Read More