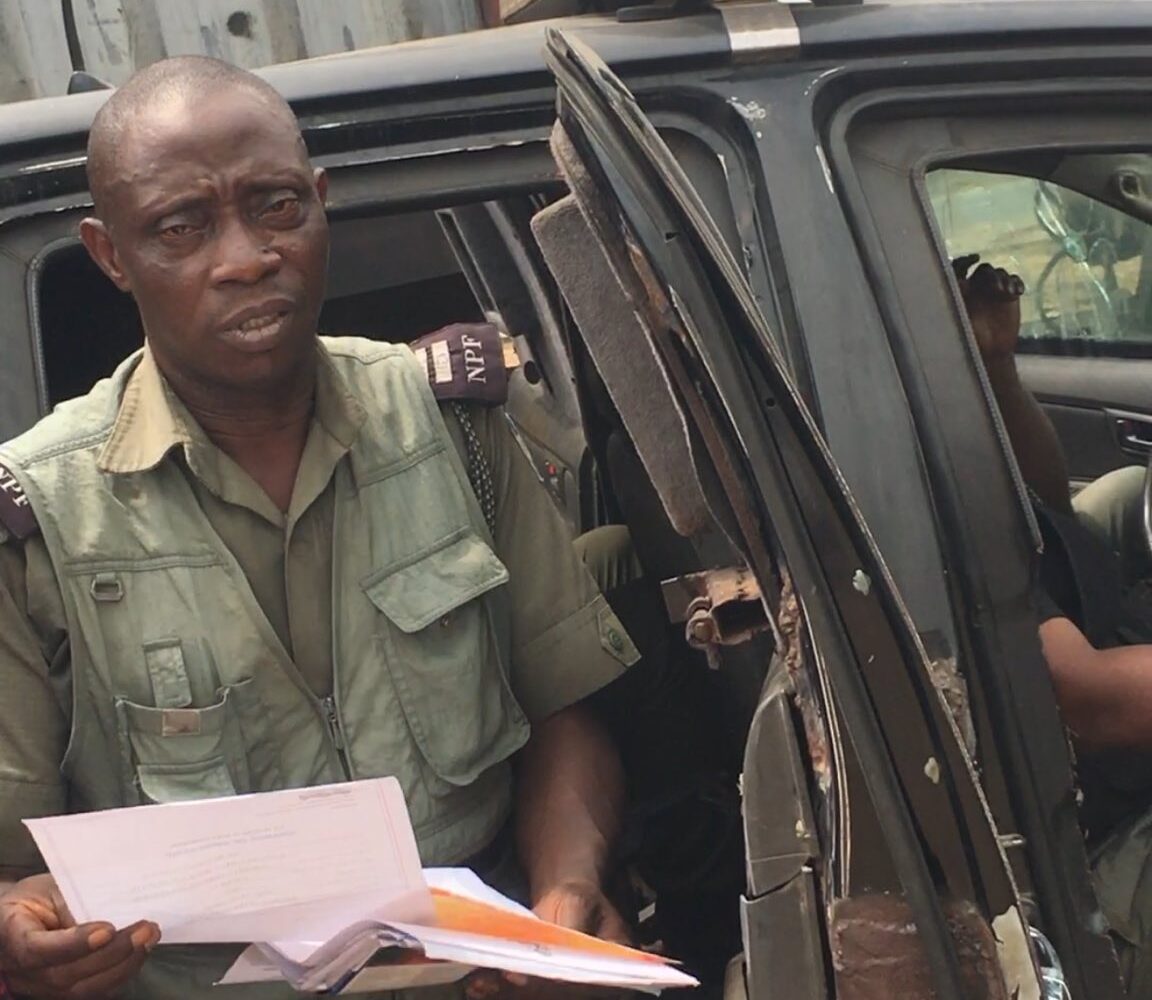 According to report reaching oyogist.com, A Nigerian man has narrated his experience about ho Nigerian Police officers extorted money from him while traveling from Lagos to Ondo state.

He tweeted: “These happened few minutes ago. I will do them the honour to make them popular. Officer Jeremiah Sunday the one on black police top, while the other officer is held the documents. “

“We are currently in transit from Lagos to Ondo State. The Ijebu-Ode police divisional headquarters highway patrol team held us down..they asked for all our papers we gave it to them and it was complete (the car owner have proof of ownership and every necessary documents)”

“However, he was unaware that he needed to do change of ownership. Immediately they told him, he said he will go do it once he gets to destination. At this point, I felt in my heart a sane police officer will leave you to go do what you’re meant to do…”

“There were some persons who they stopped initially and the ended up releasing them without having up to 15% of our papers. These officers told us to go and bring 60k, it was really surprising and annoying. I felt they just wanted to use opportunity. After some back and forth.”

“They said we should bring 10k. Unfortunately we didn’t have cash and we even told them we are on a long journey that they should just take what we have and release us (that we’ll go sort the document issue once get to our destination). These people refused.”

Then the drama began: They said they will take us to the POS to withdraw cash for them. These people took us to the ATM and took 10k from us (26.30 USD for 5police officer Lmao!)”

“The sad part of it was that, there was an almost fatal accident around the POS area. These people did not even get down from their desperado four leg. They sat, the same Jeremiah Sunday who started checking us initially ended up not sitting and staring at the accident scene without any reaction.”

“We brought 10k from the POS, same Jeremiah Sunday (Money Verification Officer 👮‍♀️) ran after 10k and started counting profusely with uncoordinated stuttering. These people delayed us for more than 4hours and after that took the money to only tell us what we will have to do when we get home. They could have just done this without collecting money. These people are evil and they will never change. Yes, I know there are some good ones, but out of how many? It is well with Nigeria. “ According to reports reaching oyogist.com, US President-elect Joe Biden, while speaking after the Electoral College gave approval of his election win, said that the "will of the people prevailed" toda
Read More According to report reaching oyogist.com, Northern Governors Forum on Wednesday said it is not against the recent scrapping of the Special Anti-Robbery Squad (SARS). Chairman of the Northern Governor
Read More OYOGist.com has learned that popular Nigerian Nollywood actress, Eniola Kuburat has been reported dead after suffering from a brief illness. The shocking news of Eniola's death was confirmed by her fe
Read More