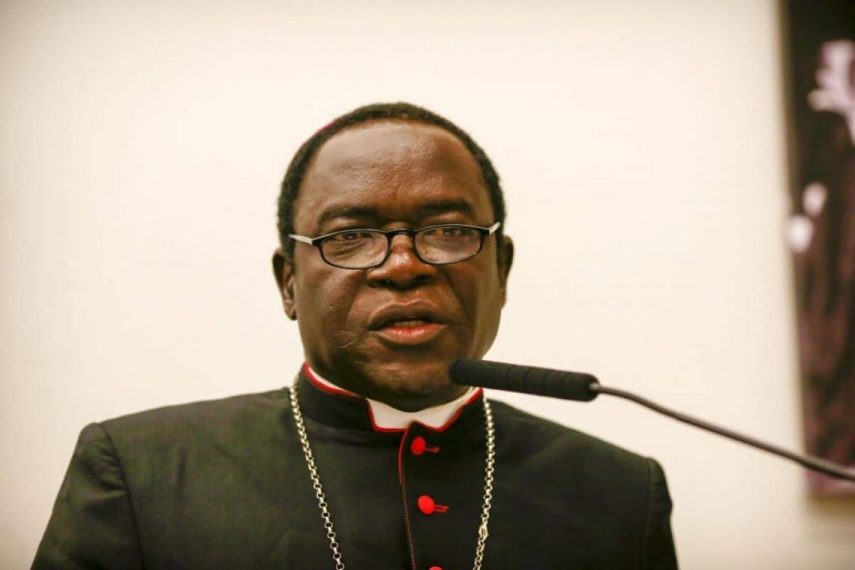 According to report reaching oyogist.com, the Christian Association of Nigeria (CAN) has reportedly given a stern warning to those threatening Catholic Bishop of Sokoto, Dr. Matthew Kukah, to have a rethink of their actions.

This was made known in a statement released by the General Secretary, CAN, Joseph Daramola, on Thursday while urging the relevant security agencies to ensure the protection of the Catholic Cleric as the threats against him signify grave danger.

The statement reads; “We have been watching the unfolding scenario since Bishop Kukah spoke his mind on the State of the Nation in his Christmas homily and how some groups of people have been threatening him with ﬁre and brimstone while all relevant security agencies are pretending as if nothing unusual is happening.

“We wonder if those threatening the Catholic Bishop of Sokoto are above the law or if they are sacred cows in the country.

“We have studied the whole Christmas message of Dr Kukah and we are yet to see any incitement against Islam or non- Christians. We see nothing wrong in his message to the nation that has been under the siege of terrorists, herdsmen killers, bandits and kidnappers as if there was no government in place. We see nothing wrong in telling a government whose lopsided appointments are against Christians the whole truth.

“If criticism against a Muslim President today, is an incitement to violence against Islam, it then means those who were criticising the duo of former Presidents Olusegun Obasanjo and Goodluck Jonathan when they were in power were actually attacking Christianity.

‌“When did the Police and the Directorate of the State Security Services lose their power to miscreants and lawless people who are making boasts of their lawlessness without a challenge? We wonder if those Muslim groups who are threatening to deal with Kukah got equal response from their Christian counterparts, are we not setting up the country on ﬁre?

“Bishop Kukah was posted to serve in Sokoto by the Papacy and threatening him to leave is a global threat to Christianity. In this same country, we have a Catholic Priest whose name is synonymous with President Muhammadu Buhari yet the Catholic Church has not deemed it ﬁt to sanction him because Freedom of Speech and Association is not only a constitutional matter but godly.

“We call on President Muhammadu Buhari and all the security agencies to ensure that no harm befalls the Catholic Bishop of the Sokoto Diocese, Dr Matthew Hassan Kukah. As far as the Christian Association of Nigeria is concerned, what he said in his Christmas Homily was still within the ambience of the law.

“It is high time those hiding under religious sentiments to promote violence and crises stopped doing so if we want this country to progress. We have had enough of bloodshed in the country and we call on the security agencies to rise up to their constitutional responsibilities. Nothing must happen to Bishop Matthew Hassan Kukah. Enough is Enough.” Oyogist.com earlier reported that the state government had requested the closure of all schools successful last Wednesday in the wake of gridlock and badgering of residents that went with the #EndSARS
Read More I Have Recovered From COVID-19, Says Ondo Governor, Akeredolu

After days in self-isolation after he was infected, the Ondo State Governor, Mr Rotimi Akeredolu, has tested negative for COVID-19, oyogist.com reports. Governor Akeredolu in a weekly press briefing o
Read More The Economic Community of West African States (ECOWAS) on Tuesday disclosed its displeasure with the Military coup in Mali. In a press release furnished to the public in French but translated by IPoli
Read More