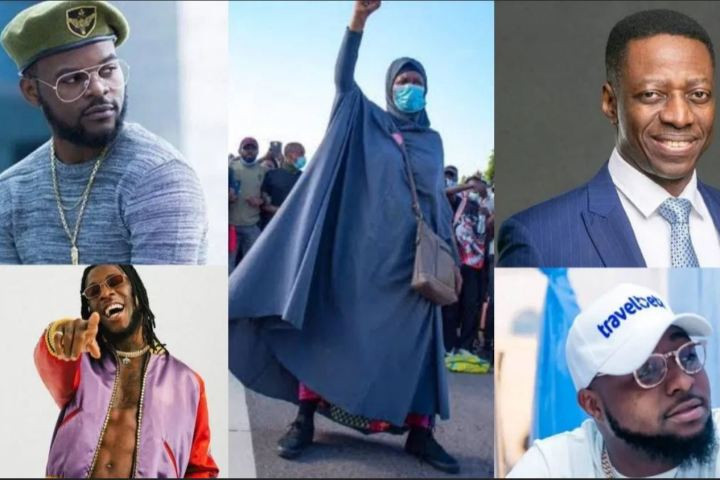 An order has been made to prevent further prosecution of Pastor Sam Adeyemi of Daystar Christian Centre, Burna Boy, Davido, Falz, activist Deji Adeyanju et al. for participating in #EndSARS protest has been given by a high court in Abuja.

The court orderd the police and Magistrate Omolola Akindele to stop the prosecution.

The lawyer alleged his property were destroyed during the end SARS protest and demanded for the prosecution of the defendants who promoted the protest.

According to a criminal complaint filed by the lawyer, Kenechukwu Okeke, the Magistrate court is to right away stop proceedings and stay action against 50 persons who supported the #EndSARS protests.

Also, Justice Bello Kawu restrained the Nigeria police from arresting or taking any action against the individuals after the court had ordered police investigation.

This was after Deji Adeyanju filed an application before the FCT high court seeking a review of the substantive matter before the magistrate.

In ruling, Justice Kawu said, “An order of this honourable court granting leave to the application to issue and serve on the defendant an application for review against the proceedings/direct criminal complaint of Hon. Omolola Tolulope Akindele sitting at Chief Magistrate Court II, Wuse Zone 6 in the suit of Kenechukwu Okeke Vs Deji Adeyanju and 49 others in suit No. CR/49/2020.” OYOGist.com has learned that the federal government on Thursday has said it was creating micro-distrubution centres for users of cooking gas to be able to afford the cylinder had as renting the federa
Read More An order which was imposed by US President, Donald Trump to ban the popular video sharing app TikTok from smartphone app stores in the US has been temporarily blocked. Recall that earlier this year, P
Read More