The Police ACP was sentenced to life imprisonment alongside his mechanic, Niyi Ibrahim Afolabi who sold a stolen vehicle from kidnappers within the state to him.

The investigating policeman testified that the car was tracked to the compound of ACP Akubo Aboye. The ACP on interrogation confessed that he bought the Hilux van from his mechanic who received it from the abductors .

The offence contravened sections 346(2), 1(2)a, and section 5 of the Criminal Code Cap C16 Laws of Ekiti State, 2012 and Robbery and firearms special provisions Act, Cap R11, laws of the federation of Nigeria, 2004, Felix Awoniyi, the prosecuting counsel noted.

Justice John Adeyeye who presided over the matter found the ACP guilty and sentenced him to life imprisonment accordingly.

“I find you guilty of receiving stolen vehicle. All evidence pointed to the very fact that you simply were aware that the car was stolen. you’re hereby sentenced to life imprisonment for the offence,” the justice said.

According to the written record, the offence was committed on or about the 9th -19th day of May 2005 at GRA, Ado Ekiti. the abductors then armed themselves with guns and kidnapped one Moses Ajogri 40 and robbed him of his Toyota Hilux van with Reg. No. APP 509 BK. OYOGist.com has learnes that the Nigeria Security and Civil Defence Corps (NSCDC) in Oyo State has warned members of the public against violating the order of the Federal Government on inter-state tra
Read More 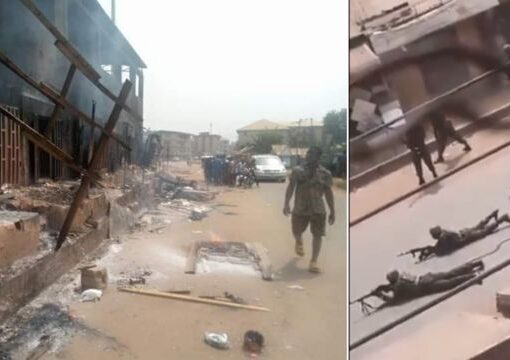 The Indigenous People of Biafra (IPOB) has supported the clash between the Nigerian army and the Eastern security outfit group which happened few days back, Oyogist.com has learnt. Spokesman of IPOB,
Read More