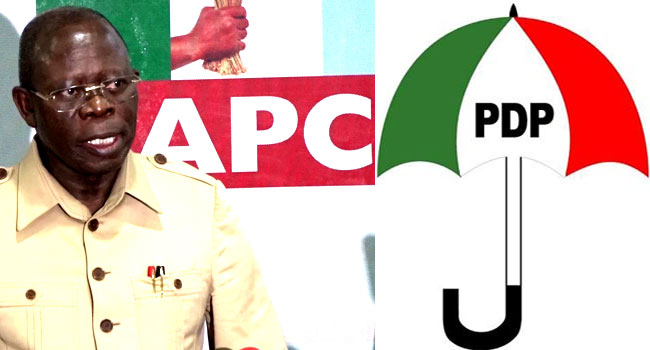 According to report reaching oyogist.com, the People’s Democratic Party (PDP), has called on the former National Chairman of the All Progressive Congress (APC), Comrade Adams Oshiomole, to accept defeat and stop all the attacks on the Edo state Governor, Godwin Obaseki.

This was made known in a statement issued by the Edo State PDP Publicity Secretary, Chris Nehikhare, who noted that various attacks on Governor Godwin Obaseki, was an unwarranted attack based on falsehood.

Nehikhare stated; “The Edo State Governor, Mr Godwin Obaseki, is not profligate like Oshiomhole and this much is evident from the governor’s leadership style as well as the manner in which he has managed the state’s resources to the admiration of local and foreign partners, who continue to commend the prudent, transparent and judicious allocation of resource in pursuit of sustainable development and economic advancement in the state.

“There is no denying that Edo people are tired of the lies and falsehoods propagated by Oshiomhole and his minions. It is high time they embrace the Resetting Agenda of the Governor Obaseki and the PDP.” Is Akin Alabi Right With His Tweet? Nigerians’ are Dragging Him