Oyogist.com has learnt that a young boy of seven years has been hailed for his bravery, after he saved his baby sister from dying due to a fire that engulfed their family home in New Tazewell, Tennessee

The whole family had gone to bed around 8.30pm but woke up seeing their whole house caught up in flames.

Thee couple were able to escape with two of their young sons, Chris and Eli, but their daughter Erin, 22 months, was trapped in her bedroom, surrounded by smoke and fire.

‘We went outside to get to her from the window, but there was nothing for me to stand on to reach up there. So I picked up Eli, who went through the window and was able to grab her from her crib.’

We couldn’t’ be more proud of Eli. He did something a grown man wouldn’t do.’ In an interview, Eli told how he’d grabbed Erin and said to Chris: ‘I got her, Dad.’ He went on: ‘I was scared, but I didn’t want my sister to die.’ 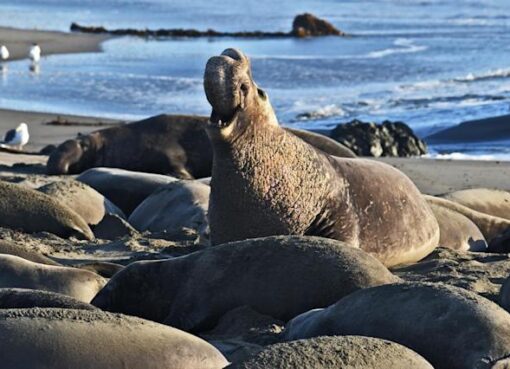 Oyogist.com has learned that a California man who fatally shot an elephant seal while it rested on a beach has been sentenced to three months in prison. The man identified as Gerbich reportedly brough
Read More Nigeria has continued to witness an alarming level of police brutality and high-handedness of some men in uniform, and more notoriously from officers of the Special Anti Robbery Squad (SARS) division.
Read More A corps member identified as Amaka Asikaogu has reportedly been found dead in an Abuja hotel, few days to the end of her service year. The deceased checked into New England Hotel in Abuja on Saturday
Read More