UN envoy says he hopes meeting in Switzerland to result in swift release of detainees.

The United Nations envoy to Yemen has said the country’s warring sides have begun talks in Switzerland on a prisoner exchange deal.

Martin Griffiths said on Friday he hoped the UN-sponsored meeting, which is co-chaired by the International Committee of the Red Cross, would result in the quick release of detainees.

“My message to the parties is conclude discussions, release detainees swiftly, bring relief to thousands of Yemeni families,” he added.

Yemen’s internationally recognised government and the Houthi rebels had initially been scheduled to meet on Thursday to finalise a deal that could see more than 1,400 prisoners freed.

The government has been battling the Houthis since 2014, when the rebels seized much of the north including the capital, Sanaa. A Saudi-led military coalition intervened on the side of the government the following year.

The war has killed more than 100,000 people and created the world’s worst humanitarian disaster, with more than three million people internally displaced and two-thirds of the population relying on aid for survival.

The government and the Houthis agreed to exchange some 15,000 detainees as part of a peace deal brokered by the UN in Sweden in 2018.

The two sides have since made sporadic prisoner swaps, but the release of 900 loyalists in exchange for 520 rebels – if it materialises – would mark the first large-scale handover since the war erupted. 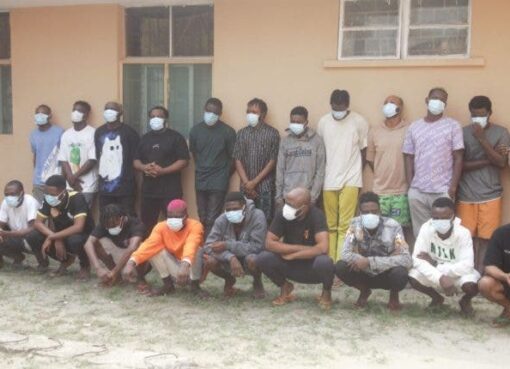 Operatives of the Lagos Zonal Office of the Economic and Financial Crimes Commission (EFCC) on Tuesday announced the arrest of twenty-two persons for their alleged involvement in internet fraud. Accor
Read More Kogi State Governor, His Excellency Yahaya Bello has said the judgment of the Election Tribunal upholding his election and the All Progressives Congress (APC) earlier today is a re-affirmation of his
Read More The former Governor of Oyo State, His Excellency Adebayo Alao Akala has celebrated his 70th birthday among top political leaders and elder statesmen in the country, OYOGist.com reports.
Read More