Google is expected to see its first decline in US ad revenues this year as the coronavirus pandemic hits travel advertising, a market tracker said Monday.

New research by eMarketer indicates Google will still be leading digital advertising but with a smaller share as the market evolves into a “triopoly” with Facebook and Amazon.

Google’s net US digital ad revenues will drop 5.3 percent to $39.58 billion to bring its market share down to 29.4 percent, according to the eMarketer forecast which was sharply revised due to the pandemic.

Google’s decline is “primarily because of a sharp pullback in travel advertiser spending, which in the past has been heavily concentrated on Google’s search ad products,” said eMarketer analyst Nicole Perrin.

“Travel has been the hardest-hit industry during the pandemic, with the most extreme spending declines of any industry. E-commerce-related ad spending has also been dampened to some extent: Amazon reportedly pulled its ads from Google search earlier this year as it struggled to meet customer demand for its e-commerce services.”

A big part of the decline will come from “search advertising,” or paid messages deployed by Google when a user enters a search query.

Search ad revenue, in which travel is a major component, is expected to drop by 7.2 percent in the US, eMarketer said.

Facebook is expected to see growth in its US ad revenues of nearly five percent to $31.43 billion, driven by Instagram, according to the report. That would give Mark Zuckerberg’s firm a 23.4 percent market share.

Amazon, meanwhile, is extending its strong growth in online advertising with an expected 23.5 percent rise to $12.75 billion, putting its market share at 9.5 percent, eMarketer said.

Until recently, analysts had described the digital ad market as a duopoly dominated by Google and Facebook, but Amazon has been rising quickly.

The Federal Executive Council has concluded it's closed door meeting with an estimated budget of N13.08trn projected for the 2021 fiscal year. This was disclosed by the Minister of Finance, Budget and
Read More 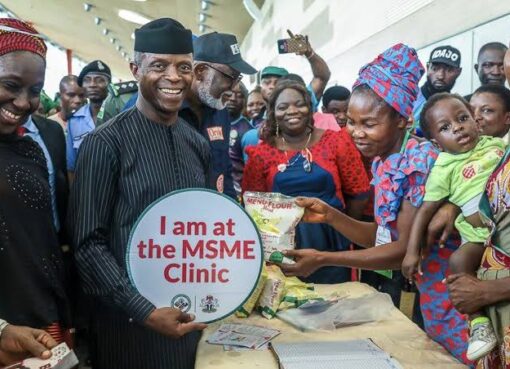 According to reports reaching Oyogist.com, the bank of Industry under the Ministry of Industry, Trade and Investment, has gained a one billion dollar syndicated loan to support Micro, Small and Medium
Read More The CEO of beverage maker PepsiCo, Ramon Laguarta, on Wednesday, 17th of June, 2020 announced that his company would be investing more than $400 million over a five-year-period to "lift up Black commu
Read More